Cate White: At the Margins of Psyche and Culture 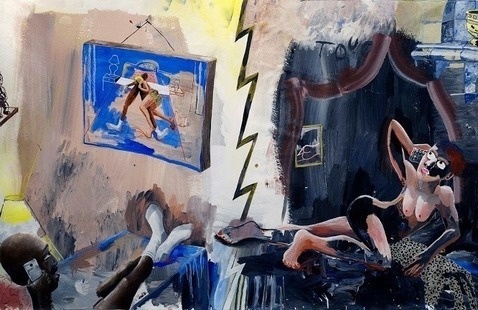 Born in 1971 into the "back-woods culture of guns, 4x4s, and meth in Northern California," self-taught artist Cate White’s intimacy with cultural margins is reflected in her art—in subject matter and philosophical perspective. Her narrative paintings are symbolically charged, and illuminate many of our personal and collective shadows in relation to class, race, gender, trauma, morality, and power. In this webinar, White will provide an overview of her creative evolution including the inspirations, struggles, controversies, and studio practices that shape her work.

White received a BA from Dominican University in 1994, after which she returned to some different back-woods for the duration of her 20s. She began painting at age 30 in 2002 and earned her MFA from John F. Kennedy University’s Arts and Consciousness program in Berkeley, CA in 2010.

In the last 5 years Cate has exhibited work in Denmark, Los Angeles, Atlanta and the Bay Area, with solo shows in San Francisco, Oakland and Hayward. She has presented at the San Francisco Art Institute, Mills College, UC Berkeley and is slated to be a visiting artist at the University of New Mexico and at Sonoma State University in 2016. She was the recipient of Oakland’s ProArts 2x2 Solos award in 2013 and the 2014-2015 Tournesol Award from Headlands Center for the Arts, a year-long funded residency for a Bay Area painter. She has lived and worked in Oakland, CA for the past 8 years.

Register for the zoom link