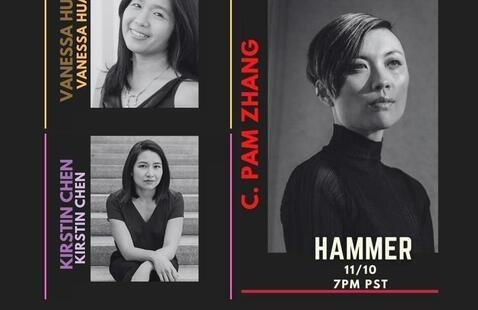 Hammer Theatre, Black Box Theatre View map Free Event
Add to calendar
Save to Google Calendar Save to iCal Save to Outlook

http://clasanjose.org #canonslayers
View map Free Event
Add to calendar
Save to Google Calendar Save to iCal Save to Outlook

The Center for Literary Arts is pleased to present acclaimed authors, C Pam Zhang, Vanessa Hua, & Kirstin Chen in a reading from their latest novels on Thursday, November 10, 2022 at Hammer Theatre at 7PM PST.

Born in Beijing, C Pam Zhang is mostly an artifact of the United States. She is the author of How Much of These Hills Is Gold, winner of the Academy of Arts and Letters Rosenthal Award and the Asian/Pacific Award for Literature, nominated for the Booker Prize, a finalist for the PEN/Hemingway Award and the National Book Critics’ John Leonard Prize, and one of Barack Obama’s favorite books of the year. Zhang’s writing appears in Best American Short Stories, The Cut, McSweeney’s Quarterly, The New Yorker, and The New York Times. She is a National Book Foundation 5 Under 35 Honoree and a New York Public Library Cullman Fellow.

Vanessa Hua is a columnist for the San Francisco Chronicle and the author of the novels Forbidden City and A River of Stars and a story collection, Deceit and Other Possibilities. A National Endowment for the Arts Literature Fellow, she has also received a Rona Jaffe Foundation Writers’ Award, the Asian/Pacific American Award for Literature, and a Steinbeck Fellowship in Creative Writing, as well as awards from the Society of Professional Journalists, among others. She has filed stories from China, Burma, South Korea, and elsewhere, and her work has appeared in publications such as The New York Times, The Washington Post, and The Atlantic. She has taught most recently at the Warren Wilson MFA Program for Writers and the Sewanee Writers’ Conference. She lives in the San Francisco Bay Area with her family.

Kirstin Chen is the New York Times best-selling author of three novels. Her latest, Counterfeit, is a Reese’s Book Club pick, a Roxane Gay book club pick, and a New York Times Editors’ Choice. It has also been recommended by The Washington Post, People Magazine, Entertainment Weekly, Vogue, Time, Oprah Daily, Harper’s Bazaar, Cosmopolitan, Good Housekeeping, Parade, and more. Translation rights have sold in seven languages and television rights have been optioned by Sony Pictures. Her previous two novels are Bury What We Cannot Take and Soy Sauce for Beginners.

​She has received fellowships and awards from the Steinbeck Fellows Program, Sewanee, Hedgebrook, Djerassi, the Napa Valley Writers’ Conference, the Toji Cultural Foundation, and the National Arts Council of Singapore. Her writing has appeared in The Cut, Real Simple, Literary Hub, Writer’s Digest, Zyzzyva, and the Best New Singaporean Short Stories. She holds an MFA from Emerson College and a BA from Stanford University. Born and raised in Singapore, she lives in New York City.

This event is made possible thanks to the continued support of the Martha Heasley Cox Lecture. This generous endowment, created by San José State Professor Emeritus Martha Heasley Cox, established an ongoing series to bring celebrated and influential authors to San José.

College of Humanities and the Arts, English and Comparative Literature