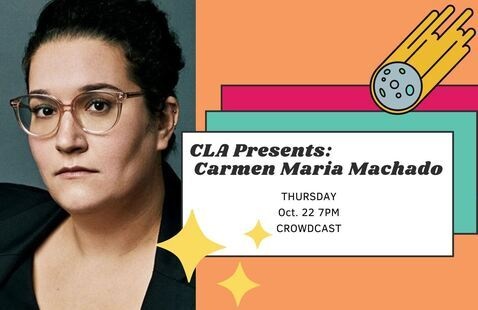 The Center for Literary Arts is excited to present author Carmen Maria Machado in a reading and conversation with Linda Castillo, Founder and Executive Editor of Modern Latina. This free event is co-sponsored by MACLA and will take place Thursday, October 22nd at 7PM on Crowdcast.

In the Dream House won the 2020 Lambda Award, was long-listed for the Andrew Carnegie Medal for Excellence in Nonfiction, was the #1 Indie Next Pick for November 2019, and received starred reviews from Kirkus, Booklist, and Publishers Weekly. Of Machado and her memoir, the New York Times writes, “Welcome to the House of Machado. Proceed directly into the forbidden room; enjoy the view as the floor gives way.”

Carmen Maria Machado is the author of the bestselling memoir In the Dream House and the award-winning short story collection Her Body and Other Parties. She has been a finalist for the National Book Award and the winner of the Bard Fiction Prize, the Lambda Literary Award for Lesbian Fiction, the Lambda Literary Award for LGBTQ Nonfiction, the Brooklyn Public Library Literature Prize, the Shirley Jackson Award, and the National Book Critics Circle's John Leonard Prize. In 2018, the New York Times listed Her Body and Other Parties as a member of "The New Vanguard," one of "15 remarkable books by women that are shaping the way we read and write fiction in the 21st century."

Her essays, fiction, and criticism have appeared in the New Yorker, the New York Times, Granta, Vogue, This American Life, Harper’s Bazaar, Tin House, McSweeney's Quarterly Concern, The Believer, Guernica, Best American Science Fiction & Fantasy, Best American Nonrequired Reading, and elsewhere. She holds an MFA from the Iowa Writers’ Workshop and has been awarded fellowships and residencies from the Guggenheim Foundation, Yaddo, Hedgebrook, and the Millay Colony for the Arts. She lives in Philadelphia and is the Abrams Artist-in-Residence at the University of Pennsylvania.

Linda Castillo is the Founder and Executive Editor of www.ModernLatina.com. Castillo writes on topics that empower and inspire Latinas including art, motherhood, green living, culture, travel, and issues transforming the Latino community. She has earned a B.S. in Business and an M.S. in Mass Communications from San Jose State University.

College of Humanities and the Arts