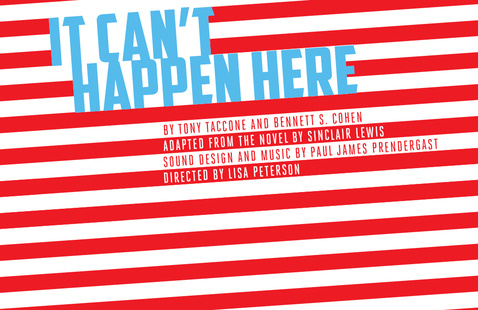 Available on demand through November 8

Berkeley Rep intends for this project to encourage dialogue and motivate citizens to exercise their civic power and vote. Visit vote411.org.

AVAILABLE ON DEMAND THROUGH NOVEMBER 8, 2020.

Adapted to be presented as a radio play, Sinclair Lewis’ darkly satirical and oddly prescient 1935 novel follows the ascent of a demagogue who becomes president of the United States by promising to return the country to greatness. In 2016, Berkeley Rep unveiled its stage adaptation of Lewis’ It Can’t Happen Here; one week after the production ended, the presidential election roiled the nation.

For the radio play, Berkeley Rep will reprise this production with the same director and much of the original cast, adding Oscar-nominated actor David Strathairn (Good Night, and Good Luck) as protagonist—just in time for the 2020 presidential election. The audio drama is being offered free to organizations across the country, including Hammer Theatre Center, with the intent to encourage dialogue and motivate citizens to exercise their civic power.The Hammer Theatre Center is honored to join theatres across the nation to help spread the word about this production. Berkeley Rep’s former Artistic Director Tony Taccone along with screenwriter Bennett S. Cohen return with the original director, two-time Obie Award winner Lisa Peterson. The trio previously collaborated on It Can’t Happen Here when it had its premiere at Berkeley Rep in 2016

Read more about it here.

I think this play is scarier right now than "War of the Worlds"! Berkeley Rep made it work well with just audio. We're looking forward to hearing the last episode.