Justice For Our Lives Exhibit 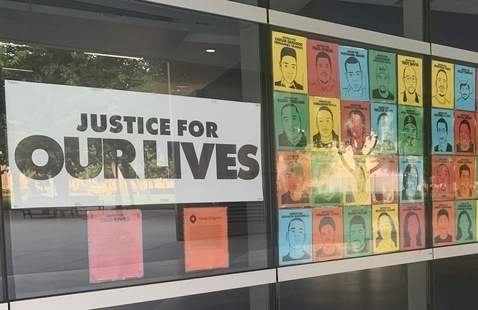 Justice For Our Lives is a digital portrait series of 100 people killed by US law enforcement since the beginning of the 21st century. This project is a visual aide to support the struggle, led primarily by impacted families and activists, against state sponsored terrorism that targets communities of color and other marginalized victims. The graphics are open source templates made available for free download at justiceforourlives.com offering protest art as an accessible tool to gain visibility for these victims through engagement with the community.

Oree Originol is a visual artist born on September 11, 1984 in Glendale, California. In 2009 he moved to the Bay Area in pursuit of a career as an artist and social activist. Oree created a total 100 black & white portraits that would become the visual backdrop to numerous Black Lives Matter protest in the Bay Area and beyond. His portraits have been reproduced and shared worldwide in public demonstrations, classrooms, museums, and online. In 2016, his project exhibited at the Yerba Buena Center for the Arts, San Francisco, CA, and in 2020, at the Smithsonian American Art Museum, Washington DC who also own digital copies for their permanent collection. Oree continues to grow in his creative development and have an impact on his community.