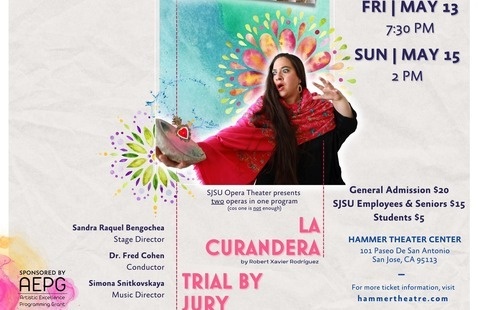 La Curandera, composed by Robert Xavier Rodriguez, is a one-act comic opera, set in present-day Tepoztlán. This enchanting and mystical opera is a refreshing take on the same story as Mozart’s Bastien und Bastienne, where the sorcerer is replaced with a curandera, a Mexican folk healer and magician. Watch as La Curandera cures Alba’s jealous heart. ¡¡Ayyyyy!!

Silence in court!! Trial by Jury by Gilbert and Sullivan is a classic and hilarious one-act comic opera. Laugh out loud at the antics on stage as ex-lovers Edwin and Angelina battle it out in a “breach of promise of marriage” lawsuit. Perhaps these jealous hearts are long past healing… Catch the “Trial-Law-Law” of the century on May 13th and 15th at the Hammer Theater.

Sponsored in part by the College of Humanities & the Arts Artistic Excellence Programming Grant.

College of Humanities and the Arts, Music & Dance