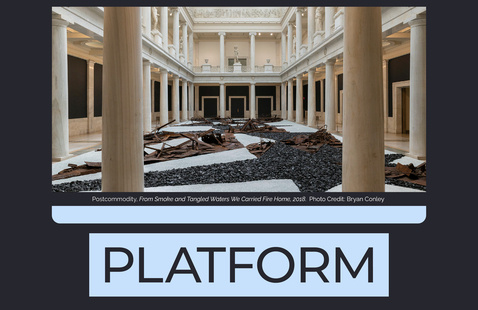 Postcommodity is an interdisciplinary arts collective comprised of Cristóbal Martínez, and Kade L. Twist. Postcommodity’s art functions as a shared Indigenous lens and voice to engage the assaultive manifestations of the global market and its supporting institutions, public perceptions, beliefs, and individual actions that comprise the ever-expanding, multinational, multiracial and multiethnic colonizing force that is defining the 21st Century through ever increasing velocities and complex forms of violence. Postcommodity works to forge new metaphors capable of rationalizing our shared experiences within this increasingly challenging contemporary environment; promote a constructive discourse that challenges the social, political and economic processes that are destabilizing communities and geographies; and connect Indigenous narratives of cultural self-determination with the broader public sphere.

Postcommodity acknowledges the important contributions of its previous collaborators: Raven Chacon (2009-2018), Steven Yazzie (2007-2010), Nathan Young (2007-2015), Adam Ingram-Goble (Game Remains), Andrew McCord (If History Moves at the Speed of Its Weapons, Then the Shape of the Arrow is Changing, and Promoting a More Just, Verdant and Harmonious Resolution), Annabel Wong (Dead River) and Existence AD (Dead River).

The newly formed ConSortiUm, a collaborative project of art museums and galleries from the California State University (CSU) system, is pleased to announce a virtual event series that actively engages students, faculty, staff, and communities through visual arts-based dialogue. The inaugural program, PLATFORM, will launch in September 2020 and include six live virtual conversations with contemporary artists, collectives, and curators whose work is critical to current re-imaginings of the art world, and the world at large.

All events will be presented live via Zoom and during Pacific Standard Time hours with access for all CSU campuses. These events are also free and open to the public. Recordings of the events will be available for post live-stream viewing and archived by the sponsoring institutions for future viewing.

Register for the zoom link.