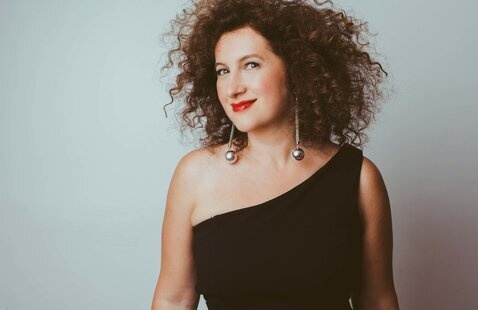 Hammer Theatre, Rooftop Terrace View map $15-$45
Add to calendar
Save to Google Calendar Save to iCal Save to Outlook

http://hammertheatre.vbotickets.com/event/hammer_presents_sunset_series_-_svetlana__the_new_york_collective/74701 #hammertheatre
View map
Add to calendar
Save to Google Calendar Save to iCal Save to Outlook

A sophisticated jazz vocalist, Svetlana is known for her erudite and torchy approach to jazz and swing classics, as well as Broadway and American Popular Song standards. An exuberant presence on the New York City scene since emerging in the 2010s, Svetlana regularly leads her own small and large groups, including the Delancey Five and the New York Swing Collective. She has also played with acclaimed trombonist Wycliffe Gordon for several projects, including 2016's Night at the Speakeasy and 2019's Night at the Movies.

Born in Russia, Svetlana (née Svetlana Shmulyian) was drawn to performing at a young age. Growing up, she listened to an eclectic mix of music, including jazz. Seeking to expand her artistic opportunities, she moved to New York's East Village in the late '90s. She eventually enrolled at the Manhattan School of Music where she graduated in 2015 with her MA. While there, she studied with noted vocalists Theo Bleckmann, Gretchen Parlato, and Kate McGarry. She also took composition courses with James McNealy and Phill Markowitz. As a solo performer, Svetlana has toured internationally, appearing at various festivals and clubs, including Tel Aviv Blues Festival, Italian Villas and Jazz Festival, Blue Note Jazz Festival, and more. In 2016, she released her debut album, Night at the Speakeasy, recorded with Grammy-winning producer Guy Eckstine. The album also featured appearances by trombonist Wycliffe Gordon, pianist Sullivan Fortner. Svetlana returned in 2019 with Night at the Movies, which found her interpreting acclaimed film songs from the French New Wave and Soviet Cinema to contemporary Hollywood themes. Produced by Matt Pierson with arrangements by Gil Goldstein, the album again showcased contributions by trombonist Gordon and pianist Fortner, as well as guitarist Pasquale Grasso, drummer Rogerio Boccato, and others. ~ Matt Collar, Rovi