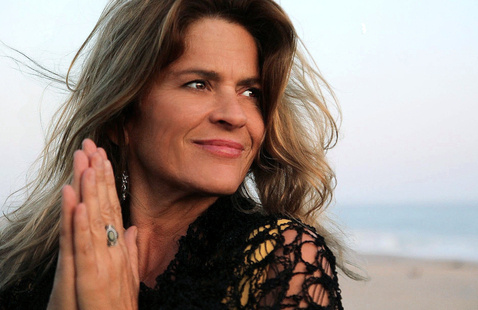 Hammer Theatre, Rooftop Terrace View map
Add to calendar
Save to Google Calendar Save to iCal Save to Outlook

Brazilian jazz vocalist Claudia Villela grew up surrounded by diverse musical influences, absorbing everything from baroque to jazz. The musical odyssey started at home in Rio de Janeiro, where she listened to the notes of her father's harmonica and her mother's singing. As she lay in bed each night, a Latin lullaby drifted through her window from a nearby samba school. When she turned one year old, her birthday gift from her dad was a pianola, which is similar to an accordion.

Villela possesses an impressive five-octave range. That range, coupled with her intuitive improvisations and her delightful playfulness, have drawn fans at a number of prominent night spots and music festivals, among them the Monterey Jazz Festival and Jazz at Filoli. She produced her first release in 1994, Asa Verde, and Taina Music released the album of self-penned songs. Her children, Christina and Carla, appeared on one of the tracks. The following year, Taina Music issued First Light, an album that contains both Brazilian folk music and original works by Villela. Appearing on the album are Toninho Horta, Danny Gottlieb, and Michael Brecker.
—
Guinga began his musical studies as a self-taught violonista at 13. Later, he would deepen his apprenticeship of classical violão. At 16, he began to write his own compositions and in 1967, he presented one of them at II FIC (Rede Globo, Rio). In 1973, MPB-4 recorded two of his songs written with the illustrious Paulo César Pinheiro: "Conversa Com o Coração" and "Maldição de Ravel." Always flirting with the musical scenery, but was unable to make a living in it (as many sincere artists in Brazil). He became a dentist, but nevertheless registered his love for the true Brazilian tradition in appearances as sideman in several samba albums since then, like the second solo album by Cartola recorded in 1976, in which he plays the violão on "As Rosas Não Falam." As an instrumentalist, he has accompanied such artists as Beth Carvalho, Cartola, Alaíde Costa, Clara Nunes, and João Nogueira. His first solo show is from 1989, where he performed in the Vou Vivendo nightclub (São Paulo) with Paulo César Pinheiro and Ithamara Koorax. His first solo album, Simples e Absurdo (Velas 1991), featured lyrics by Aldir Blanc and special guests Chico Buarque, Cláudio Nucci, Leila Pinheiro, Paulinho Malaguti, Ivan Lins, Zé Renato, Leny Andrade, Be Happy, and others. His second album is Delírio Carioca (Velas 1993), with special guests Djavan, Boca Livre, and Leila Pinheiro. The third album, Cheio de Dedos (1996), is almost entirely instrumental, with special guests Chano Dominguez, Diapasón, Chico Buarque, Nó em Pingo D'água, and Ed Motta. This one was awarded with the Prêmio Sharp in 1996 in three separate categories: Best Instrumental Album, Best Instrumental Song ("Dá o Pé Loro," by Guinga), and Best Production (Paulo Albuquerque).