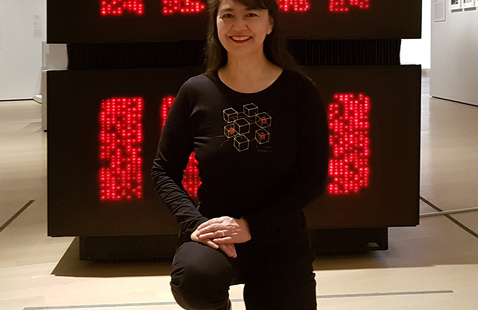 Tamiko Thiel was awarded the 2018 Visionary Pioneer Award by the Society for Art and Technology Montreal for over 30 years of media artworks exploring the interplay of place, space, the body and cultural identity in political and socially critical artworks. She will draw a broad arc from her initial work as a product design engineer in the Bay Area, to her current, international shown media artworks that include VR, AR, AI and "postdigital" fine art prints, and discuss the Hidden Histories of San Jose Japantown project, with participation from SJSU CADRE.

About the artist:
Thiel was born seven years before Kamala Harris in Oakland's Kaiser Permanente Hospital, while her parents were at UC Berkeley. Her Japanese American grandmother was born in 1909 in Sunnyvale and married her Japanese-born grandfather in San Jose Japantown's Wesley United Methodist Church, where he was a young pastor. Tamiko grew up mostly in Seattle and Kamakura/Japan, but lived in the Bay Area from 1974 - 1981 while attending Stanford and working at Hewlett-Packard, and again in San Francisco from 1994-1999. She lives and works in Munich, Germany where she had moved in 1985 to attend the Academy of Fine Arts.

An acclaimed weekly lecture series brings in artists, designers, and critical theorists from around the world, broadening the students’ experiential base and complementing local offerings. All lectures and exhibitions are open to the general public free of charge.  Unless otherwise indicated, all events are hosted by the Natalie and James Thompson Art Gallery, and take place on Tuesday evenings from 5-6pm PST.